I have been on holiday for over two weeks now and I have achieved nothing. I have been so bored I can’t remember doing much for the past two weeks.

The only thing I have managed to do is beat my ten year old cousin’s gamer score on my Xbox 360.

I was so bored I went back into work for a day!

After a few months of collecting HD DVD discs I finally got my 360 HD DVD add-on drive for my Xbox 360 (last Thursday). 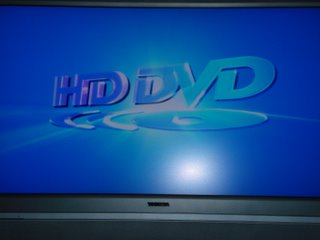 The picture is great. Contrary to what some think I didn't watch any special HD "movies", the first film I watched was Batman Begins and some of the scenes looked stunning.

Since watching Batman Begins I have watched Serenity and I have got a few more films to watch over this weekend. 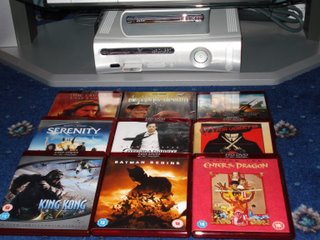 I know a few people have reported that films like Batman Begins had sound sync problems but I have not yet noticed any problems like that myself with my setup.

I pre-ordered this item in several places to make sure I got one as soon as possible. Sadly 2 of my orders were posted around the same time so now I have two! Does anyone out there want to buy a 360 HD DVD add-on?