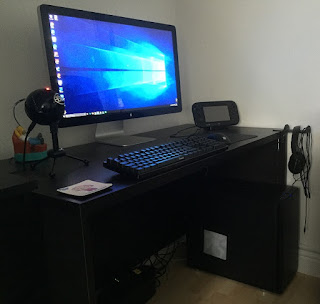 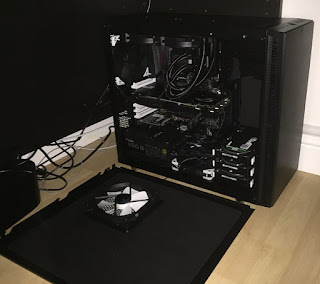 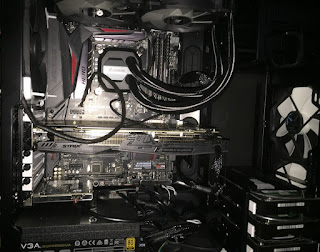 I'm really happy with going for a GTX 1070 as I can play pretty much all my games at 60 frames per second at 1440p on medium to high settings.
Posted by Adeel at 12:56 No comments:

I Suck at Titanfall

I've been playing the Titanfall beta on the Xbox One and I really like the fast paced movement and who doesn't love giant robots. Too bad I'm not too great at the game.

After another great year in Formula 1 for Red Bull, the team decided to put on a show in Milton Keynes (where the team is based). A large stretch of road going from Milton Keynes shopping centre down to Milton Keynes Central Railway station was sectioned off for the event. After finding out about the event I decided to pop along.

It was pretty cold but there was a pretty good turn out. Both Red Bull drivers Mark Webber and current champion Sebastian Vettel showed up and did a quick lap in their F1 cars. There was also a motorcycle display which included a backflip off a moving bike and former F1 and Red Bull driver David Coulthard driving a Nascar style stock car.

The event was great and I don't think I'll be able to get that close to a moving F1 car ever again.

Probably the best streak I'm ever going to have in MW3

Around this time of year a loads of big budget video games are released and I tend to go into a strange hibernation and spend a lot of time playing them. One of the games I've played lately is Call of Duty: Modern Warfare 3.

I don't play a lot of multiplayer but I thought I'd give the online modes in MW3 a go and I spent most of my time running into walls and ending up on the losing side, but I did manage to get a little streak going at one point that I thought I would share a video clip of it (and it was a good way for me to test out some of MW3's video editing and sharing features).


By most Call of Duty player's standards it's a very poor streak but for me it's the best I have done (so far).
Posted by Adeel at 09:21 No comments:

I haven't looked at Blogger's templates in a long time so I was a little shocked to see that they had improved a lot and there are some really cool looking designs, so I thought a new look was in order. After spending all of 30 seconds and doing zero customisation I have changed my blog from the old green Blogger template I used to a newer layout by clicking on a few buttons.

Blogging platforms have progressed a lot over the last few years and it's great when you can just click a button and change everything in an instant. I also like the fact that if I wanted to I could customise the look and feel too.
Posted by Adeel at 11:28 No comments:

After wanting to write a review about the Hori EX2 Fighting Stick for the 360 I started a post and never finished it.

Anyway after waiting for months and just randomly checking out on amazon.co.uk I saw a Street Fighter 4 Tournament Fight Stick by Mad Catz as being in stock, so I placed an order and it arrived so I thought now might be a good time to redo my previous blog post and compare the two sticks from the point of view of a terrible beat'em up player (if you actually want some good reviews of the sticks I would suggest visiting 1up.com for a review of the Street Fighter 4 Tournament Fight Stick, About.com for a review of the Hori EX2 or The "Break It Down" Blog for a comparison).

When I first tried comparing them I noticed the weight difference to be massively different, the Hori EX2 Fighting Stick is extremely light when compared to the hefty weight of the Street Fighter 4 Tournament Fight Stick. Neither are too heavy or too light but Street Fighter 4 Tournament Fight Stick feels a lot more substantial when on a table or in your lap.

When I looked at the joysticks side by side the obvious difference was the placement of the buttons (other than the difference in size). Most fighting games I've played only require 6 buttons and use additional buttons as extra mappable button combinations (i.e. pressing RB is a combination of 3 other buttons). The Hori stick only has 6 main face buttons and has the LB and RB buttons at the top which doesn't make them too easy to use when playing a game which the Street Fighter 4 Tournament Fight Stick has 8 face buttons for easy access.

Apparently the Street Fighter 4 Tournament Fight Stick uses Sanwa parts and not being a fighting game aficionado I had to do a little googling and found out that Sanwa is manufacturer of arcade parts in Japan. From my point of view (the know nothing point of view) the buttons and the actual joystick are slightly more responsive on the Street Fighter 4 Tournament Fight Stick and make a slightly more satisfying click to the Hori's clack noise.

Price wise the two sticks are far apart and I guess both are very good for their price ranges and it comparing them isn't really fair. Hopefully I can get my uncultured beat'em hand on the Hori Tekken 6 fighting stick there maybe a better comparison with the Street Fighter 4 Tournament Fight Stick or get hold of a Mad Catz Arcade Fight Stick and compare that with the Hori EX2.
Posted by Adeel at 13:35 No comments:

I just read over one of my posts on this blog and noticed that my spelling and grammar is worse than a 10 year-old.

I've just gone over a few posts and fixed some spelling mistakes (those that I could spot) but the grammar and text is still basically the same, I'm surprised people managed to read what I wrote.

Anyway thanks for trying to read my posts
Posted by Adeel at 23:16 No comments: